Amsterdam North as seen by Oriane

The ferry is waiting for you

Surprise! The ferries to the other side of the IJ from Central Station are free. I thought it was folkloric to cross on foot with a bunch of bikes! Some are typical: wooden mudguards, no brakes, boxes on the front wheel…. They are often personalized (color, original box at the front, a colored or specially designed bell, or a slightly cheesy decoration such as plastic flowers…)

Heading for the Eye Institute

Here we are in front of the Eye Film Institute Netherlands, a film museum inaugurated in 2012… A building with a tapered roof in the shape of a space shuttle, standing on an esplanade on the edge of the quay, from where the A’Dam Tower rises. This square skyscraper from 1965-1970 has been remodeled, transformed, and topped by a panoramic revolving restaurant: the Moon. It is located on its rooftop terrace, the A’Dam Lookout at a height of over 100m, where, in August 2016, Europe’s highest swings were inaugurated. Worth seeing, and testing! Why not? But, during our first afternoon in Amsterdam, we decided to postpone this experience for our next visit… That’s the official reason… The actual reason is that Angel is a little afraid of heights… especially in windy weather… Shhhh… That’s just between us… He’s busy taking lots of pictures. I’m gonna join him, and by the way, pose in front of…. The I AMSTERDAM!

We then chose the option to walk to the NDSM hippie neighborhood. Long live geolocation on our phones that help us cross tertiary activity zones, and provide you with Oriane and Angel’s interactive map! This unusual place is about a 45 minutes walk away… Next time, we’ll take a bike from the Eye, or we’ll take a direct ferry from the central station (the NDSM Weif, which is free)….

When we arrived, we came across a courtyard that looks like a wasteland, which houses 2 large antique sales sheds. To tell the truth, Angel’s gaze was attracted by a small sign on the ground which directed us to a bar, the Waargenoegen.
As I entered the courtyard, I thought I was in Emmaus, but as soon as I entered Neef Louis Design, I was blown away! I saw all sorts of objects from the last century, recovered from various industries, laboratories, shops; from grocery scales to industrial furniture and cloakrooms, not to mention vintage telephones and lamps…
Impossible to describe! Check it out! Across from it you’ll see the Van Dijik en Ko: a slightly more classic antique surface with many treasures. I would have loved to redecorate my flat there! But Angel refused to carry the white wood and steel china cabinet I had chosen, as well as the straightener…

On the way out, we discovered a super “peace and love” area! Dwellings and bars in containers. A large glass roof (former aircraft hangar) surrounded by a field with an open stage, housing a bar/restaurant called the Noorderlicht café. Angel of course tasted Jenever – Jone Jenever – (3 euros), but you can also taste the old one – Oude Jenever – (also 3 euros).

We had a great view of the sunset from the café. A moment of delight, dreamy, convivial, cosy… All this, without worrying about the time, a moment suspended in time… A pleasure to live in the here and now… The Amsterdamers call this the gezelligheid. (I’d rather write it than try to say it!)

Get the picture? No, not quite… in the background, a truck decorated with LGBT colors tagged with the word LOVE, and further on you can see the Faralda Crane Hotel’s famous harbor crane. The hotel houses 3 rooms! You can also go bungee jumping for 85 euros… We didn’t have the time to test it! (You believe me, right?)

Well, let’s get back to our tagged containers and other gay and apocalyptic decorations… This Thursday afternoon, there isn’t a flea market (it takes place every month on the weekends), but the warehouses that host it are filled with old containers – lined up to form streets – serving as a workshop for creative artists. Design and humor characterize this place… A selfie point will allow you to take the most original souvenir photo of Amsterdam… (don’t forget to pin your photo on a map, in case you don’t recognize the place afterwards!)

Amsterdam North as seen by Angel

Amsterdam’s trams are very convenient: in a few minutes you can cross the city centre. Here, all roads don’t lead to Rome, they lead to the Centraal Station. Around the Centraal Station, there are thousands of bikes parked, a forest of multicolored wheels and handlebars. A tunnel for pedestrians and cyclists crosses the station, Oriane almost got run over when she took the bike path — a rookie mistake, don’t be naive like her! The HeET IJ leads to the HeET IJ from where the ferries leave for Buiksloterweg and the famous, very desisgn-oriented Eye Film Institute building.

I love this building, it’s very slender, like a Star Wars vessel or a Vendée Globe trimaran.

Bikes, scooters, and even Piaggio scooters compete with pedestrians on the ferry. Behind the Eye runs the canal, which you can sail along to discover the Dutch countryside and the mills.

Okay, so Oriane admired the new swings at the top of the A’Dam tower, a former Shell tower, but she had no desire to try them, she said, and the same went for the revolving restaurant!

I think that discovering North Amsterdam by foot may hold some surprises for us, as it is a very original district where industrial wastelands have been converted into artistic and hippie zones, or into very trendy places, or even in some areas into luxury residences.
Amsterdam Noord Vintage

Luckily, Mister Angel was there, and spotted a handmade sign that was barely noticeable at all… I think it might be hiding something. Indeed, as we entered the courtyard full of heterogeneous objects, we discovered two stores of gigantic objects accessible behind two small doors which face each other at the other end of the courtyard: Van Dije en Ko and Neef Louis Design. Hang on, and welcome to Ali Baba’s largest cave of vintage and industrial objects. So, when Angel gets curious, you’ll find incredible things! Sure, it’s a change from shopping in downtown Amsterdam. I didn’t even take a picture of 0.1% of what’s there! Oriane wanted to redecorate and have me carry everything, but I’m not wearing a DHL jacket! Come on!


Then, we discovered Amsterdam’s specialty: Jenever. But no alcohol for Oriane! She had a natural raspberry juice.

They serve it in glasses filled to the brim. The tradition would have been for me to drink it with my hands behind my back directly from the counter or the table. To fulfill my role as the perfect tourist, I took a sip. 38 proof, very nice.

Further on I saw a shed from which we could hear flashes of welding crackle. intrigued, and feeling like it was my lucky day for finding unusual places, I rushed there with Oriane. To enter the hanger, we followed it to a factory door. Pushing it open, we discovered a gigantic disused factory, 80% empty.

Inside, on the right, there was an avenue of containers, and, improbably, the containers are inhabited by post-industrial artists. They create conceptual objects that they sell on the spot or to galleries or connoisseur clients.


We left a little dumbfounded and further on we discovered the famous Pilek, a very trendy bar-restaurant that is accessed through containers closed off by curtains or heat transparent plastic strips.

The restaurant’s clients were not at all hippies, but rather tourists and well-dressed Amsterdamers. As Oriane was not wearing any make-up and wasn’t carrying her fashionable handbag, we went on to the ferry landing stage. On the pontoon, a motley crowd of workers were returning home on their bikes after work, Amsterdamers were shopping, and tourists were discovering. The wind swept the pontoon and accentuated November’s cold temperatures. A selfless guitarist warmed up as we waited… 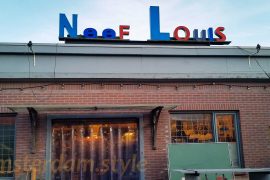