The Red District as seen by Oriane

Shortly after nightfall, take a walk around the Red Light District, one of Amsterdam’s most famous neighborhoods. Its name evokes the red lamps that light it, as well as its purveying atmosphere.

Each of these rather young sex workers is in a different showcase, sitting on a chair or bar stool, motionless or slowly undulating.

Behind her, you’ll see a bed or futon, a sink, and disposable towels. When a customer enters, a curtain closes.

What I thought of the Red Light District

Between these shop windows, you’ll see sex shops selling provocative lingerie of rather average quality, in my opinion, and all kinds of sex toys and accessories. I was expecting a little more originality or even quality from these specialized streets.

My impression of the peep show and pornographic show signs was the same. Their entrances seemed pretty creepy, so we didn’t go through with our original idea of seeing a show at the Casa Rosso, the main attraction, the Moulin Rouge (nothing to do with the famous Paris cabaret), or at the Bananenbar.

The atmosphere of the streets is neither unhealthy nor heavy, and you won’t see many thirsty customers, but rather more couples or groups of friends walking around, most likely tourists. This is the impression I got when walking around rather early (8pm). Who knows if it’s the same later at night.

The Red Light District as seen by Angel

Is it really that hot?

Proof by experience (not mine, eh…)

A man in a cap, in his forties comes up to talk to a woman. He knocks on the window, she opens it, and he bumps his head in the doorway on his way in. Often, the “lounges” can be found down the road, like many entrances in Amsterdam’s buildings. When the deal is made, the client “penetrates” the lounge and the prostitute “pulls” down a heavy red curtain to hide what happens next.

Two women in their sixties talk to prostitutes and go from window to window. Maybe they are from the city’s health services, out on an inspection tour of the Red Light District.

98% of passers-by are curious tourists, of all ages, in groups, laughing from window to window. Some groups of young males have fun by exchanging glances and equivocal expressions to see which prostitute responds warmly, showing a certain openness to moving forward with the exchange.

Pictures are forbidden. I saw a man take too long adjusting his camera. Guess what happened to him? A ninja-like prostitute threw a bucket of water on him.

Are the shops and shows in the Red Like District up to snuff?

Then there’s the Moulin Rouge and the Casa Rosso (several versions): a rather creepy peep-show with cabins in a circle overlooking a mini-stage where an actress or couple wiggles around. In your cabin, you’ll put 2€ in the slot for a few minutes of voyeurism. You can request a solo show, with admission starting at 20€ (you can add money to the slot to extend the show).

Casa Rosso is also available in a theater version. The Museum of Prostitution allows you to take a picture of your girlfriend from the outside in a red showcase. Well, I know it’s not very ethical, but you’ve gotta have some fun.

Of course, you pay for her entrance fee and make some excuse to go out onto the street while she goes up to the red room… I know, I’m awful, but she does deserve her hour of glory!
The Red Light District spreads out around a canal on rather narrow parallel grid streets in which you can smell the cannabis coming from the coffee shops.

Not to be missed : an anonymous bronze work has appeared in Amsterdam’s Red Light District, the Golden Torso (a hand on a breast). Another work is worth the detour: the Belle Statue (a prostitute in a window) created as a sign of respect for sex workers.

Note : for roots travellers, you should stay at the Coffee Shop Hotel which is a guest-house that offers a little something extra and is located at the edge of the Red Light District. You won’t even need to leave the hotel to get to the coffee shop!

trendyWhat to do in Amsterdam
2 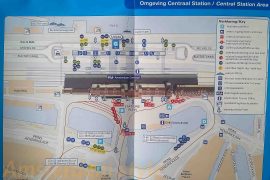 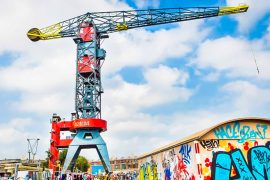 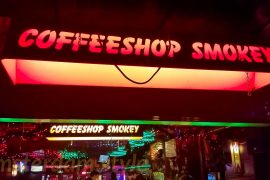